In the United Kingdom, a tombola is a form of raffle in which prizes are pre-assigned to winning tickets. ... Players pay for a ticket, which they then draw at random from a hat or tombola drum, and can instantly see whether or not they have won a prize.

I’ve been looking recently at games studios around the Sydney area. One company called SMG Studios has a site with a neat spinning tombola like menu. It feels so satisfying to click and has a lot of crazy results. What does SMG stand for? Soap Media Group? Who knows...  I hope it’s one of the many combinations that can be generated from the Tombola.

I thought I would try recreating the tumbling menu using Unity and animation events. Animation events let you call methods at a set point on the timeline.
Here is my Unity implementation and Code. It’s pretty close. I did miss the nudge on the logo when boxes are clicked. Unity’s lighting is a little darker and the menu scale is a little off but I'm happy with the result.

The set up was pretty straight forward,

That's it! The text is generated at random from a list held in a scriptable object. When the rotation is triggered we generate some new text.

I did run into an issue. If triggering an animation event at the end of an animation it fails to work.  I’m not sure why. To get it working  I needed to add the event a few frames before the end. 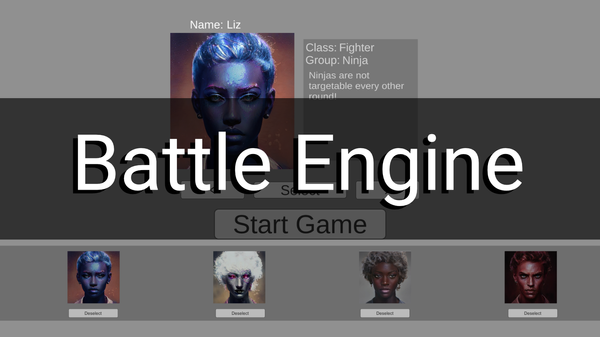 I created a basic battle game consisting of two teams of four characters. Each character has a different ability. They can attack, support and have some special tactics depending on